Animals Should Not Be Kept in Circuses

Animals should not be kept in circuses. I strongly agree with this. It is cruel, animals are not for entertainment, and it ruins their natural instincts.

Keeping animals in circuses is very cruel. Lions and tigers are forced to jump through a ring of fire! It is horrible,cruel and not funny. I do not like it at all. Animals could get scars along their backs from being whipped by their trainers. Some people even think that whipping an elephant to make it do tricks is funny. Well, think of the poor animals. Do not pay money to see people treating animals like slaves. Think, would you like to be an animal in a circus?

Secondly, animals are not for entertainment. They're supposed to be wild and free. People should pay to see them in the wild, not to see them forced to do harsh tricks. Animals are not alive to perform silly tricks in front of crowds. They are alive to live in the wild with the other animals. If you love animals, say it with me, they should not be allowed in circuses.

Also, it ruins their natural instincts. For example, lions should be out hunting, instead they're jumping around in a small area to amuse people. Now if you put those lions back in the wild they would probably be dead in 24 hours because they will have no idea what they are doing. When animals are kept in circuses and trained to do tricks it changes their life totally. As I said before, if you do this, you no longer have the animal you did before and it cannot be changed back. 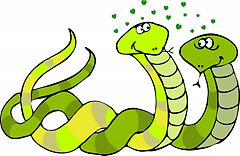 A tree snake would be a great pet for your classroom. Some eat mice. They would frighten burglars. People who are allergic to cat hair wouldn't have a problem with snakes.

Some snakes eat mice so there would be no mice in the classroom. Mice are very smelly! Miss Fisher wouldn't have to empty traps and vacuum up mice droppings if we had a snake. A pet snake would be a great help at keeping the room clean.

Snakes would also help by scaring burglars. Your things would be safe. Burglars would drop the sack they were carrying and sprint away. Bullies would stop being bullies with a snake around. So snakes aren't just helpful at keeping the room clean, they could help to keep the room safe.

Some children sneeze if they go near cats. This wouldn't happen with snakes. They have scales, not fur. They are smooth to touch, and could sit on people's arms without making anyone sneeze. Snakes would make a good pet because they are good for people with hay fever.

Snakes make the best pets. They are very clean, they keep the place safe, and the skin is good for your health. So, go out and buy a tree snake today!